THE HOLY KING IS BACK ON EARTH

The film Rey by Niles Atallah (2017) tells the story of Orélie-Antoine de Tounens, a French lawyer who tried to establish his own kingdom in Chile in 1860.  Tounens wanted to concur The Kingdom of Araucanía, inhospitable area inhabited by Mapuche, equipped with nothing more than a constitution and a new flag. After uniting different groups of natives and succeeding in becoming their ruler, he was captured and arrested by the Chilean army which brought him to the court and sent him to exile in France.

Niles Atallah grew up in California where he studied Art at the University of Santa Cruz. He has dual citizenship: of US and Chile. He is as multi-faceted as his film, for he is working as a writer and director in feature films, music videos, video art work, installations and short films in Santiago, Chile. He also created the film production company Diluvio.

In Rey, Atallah experiments with various formats which are partly modified with abrasions and colours. He uses different techniques, animation and stop-motion as well as puppets and papier-mâché masks. Some segments were shot in 35mm, 16mm and Super-8 film format in 2011 and then buried in his garden to obtain a historical impression. These shots are contrasted with clean, beautiful images of men riding on horses through an almost untouched, magnificent nature that provides a perfect setting for this fairy-tale. He uses masks for the trial so that the story becomes more and more mythological. The masks seem to be a caricature of a military system and are at the same time representing anonymity or maybe a hidden, ritual cult, referring to its cultural background. Different costumes, made of straw, masks and horses are also used in flashbacks where Tounons recalls in jail his communication with the Mapuche – a somehow exaggerated exotic image of colonialism.

The film’s use of symbolization is overwrought. Archive material, provided by the EYE Museum of Amsterdam, is used in order to give it an authentic historical frame. Ancient videos of Patagonia, the mountains, Vulcans, man with horses conquering the land, canons, ships arriving to the foreign coast and wild animals create a psychedelic collage that unfolds through the history of cinema, from its dawning to the present day, a story within a story. Some archive material, used towards the end of the movie (e.g. videos of tigers and serpents in a palace maybe represent symbols of power of a kingdom), disrupts totally the frame of the context. 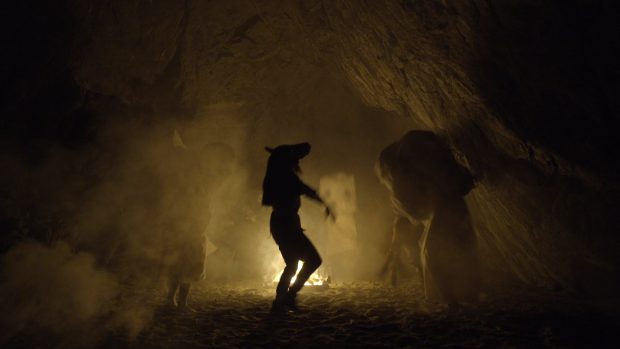 With the use of a series of different testimonies from the trial, Attalah tells different possible versions of the story. It is still not clear if Tounens was only a fanatic person with a wish to become a king of the Mapuche in their territory, a French spy, or simply a victim of a native traitor. The starting point indicates that Tounes was a fanatic,  possessed person, but also kind of a saint with celestial powers. This theme develops and continues till the end of the movie when his head is shown with three faces in a hyper galactically kaleidoscopic video sequence where the story ends with a text explaining his exile and death in France. Biblical images are repeated throughout the movie, for example when the king is asking himself several times the same questions: “Is he an archangel or a cadaver? What are his sins? Is it true he was baptized by fire?” Further on he is also supposed to part the sea as God did when Moses wanted to cross the Red Sea – maybe this was his way out of the coutry? But one scene really carries the story too far, and this is when the glacier starts interacting with him.

Following their journey, Tounens and Mr. Rosales are visiting several Mapuche villages in order to find the right trail for the leader Quilapán (the ancient leader of the Mapuche Mañil died since Tounens last visit). It’s not really clear if Rosales, who is working as his translator, is only pretending to talk Mapudungun language or not, as he is also accused of betraying Tounens. Rodrigo Lisboa (acting as Rey) seems quite authentically in his role of the possessed king, but his faultless Spanish without any accent or even with Chilean accent is quite questionable for a French lawyer. In many aspects it seems that the film is abusing exotic images of the Mapuche in order to get to create a fairy-tale with animals, superstitions and king in a beautiful surrounding, something which had always been criticized by contemporary anthropologists, yet it somehow quite faithfully represents the spirit of the 1860s.